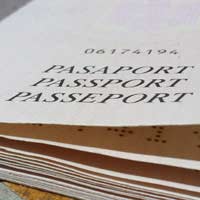 The au pair scheme operates amongst a set group of countries as dictated by the Home Office. Of these countries, there are some which require that their nationals have official permission in order to work legally in the UK as an au pair.

If your au pair is a national of one of the Accession countries, they will require an Accession Card.

What is an Accession Country?

Many Eastern European countries are referred to as Accession Countries, sometimes erroneously. Countries such as Poland, the Czech Republic and Hungary may sometimes be called accession countries, but because they are officially became part of the European Union in 2004, their citizens are now classed as full EU members and do not therefore require any formal permits to work in the UK as Au Pairs.

There are also those countries - such as Turkey, Bosnia-Herzegovina, Croatia, and Macedonia - whose membership to the EU is still in the process of being accepted or finalised but for whom membership has still not been officially granted, so they also are not ‘true’ accession countries. Nationals from these countries will currently have to go through the full visa process if they wish to apply to be an Au Pair in the UK.

However, there are two countries which joined the EU much more recently and it is these countries which we refer to as Accession Countries for the purposes of the Au Pair programme.

As of 1st January 2007, Romanian and Bulgarian nationals no longer need to apply for a visa to come to the UK to work as an au pair and may freely enter the country, however they do need to apply for what is known as a Work Accession Card (also referred to as Purple Work Cards) which permits them to work in the UK for a limited period and only to do certain jobs - one of which is to work as an au pair.

If the au pair already has their letter of invitation to be an au pair from a sponsoring family, it is advisable to apply for the accession worker card before they travel. But if for some reason, the application has not been made before the au pair arrives, then it is also possible to apply for a card once in the UK if done within the first three months of being here.

Applying for an Accession Worker Card

The accession worker card is available from the UK Border Agency and can either be obtained from one of their offices or completed online via their section of the Home Office website. Together with your completed application, you will need to present your passport or ID card, two passport-sized photographs and a range of required documents.

Changes to the Au Pair scheme in November 2008

In November 2008, the government will be changing the system of entry for au pairs coming to the UK. However, the rules for Bulgarian and Romanian nationals will remain the same.

Assess Potential Demand for Your Business

Do I Have To Use an Au Pair Agency?